A New Take on Orchid Pollination

Do a google search on “how orchids deceive” and you’ll get roughly 390,000 answers. Many orchids, you’ll learn, appear to mimic bees or wasps to deceive their pollinators into interacting with them.

In the group of orchids known as Oncidium orchids, the

… pollinator is an aggressive bee that drives other insects from its territory. This characteristic of the bee is taken advantage of by Oncidium orchids. Their flowers mimic an antagonist, causing the bee to attack them. The bee does not land on the flower, but merely strikes it, so that the pollinia become attached to its head. The pollinia bend downward slightly after they are cemented to the front of the bee’s head, so that they press into the stigma when the bee attacks a second flower. The bees must be accurate to within a millimeter to effect the exchange, yet rarely miss. Oncidium flowers do not look much like insects, yet something about their color or shape causes the bee to attack. (T. Ombrello, Plant of the Week). 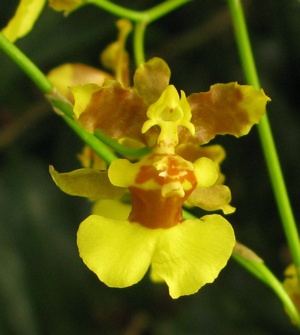 The image at left is an Oncidium sp. from my back yard. Oncidiums are known in Central America as “dancing ladies.” See the yellow skirt, the brown bodice, the headdress?

It’s growing on a branch of a nance tree, Byrsonima crassifolia. It so happens that Oncidium species are also known to mimic flowers of the Malpighiaceae family, to which B. crassifolia belongs. Malpighi flowers, you see, produce high protein oil, which is something else bees like.

In either case, whether mimicking a bee or a flower, the Oncidium provides no reward, neither nectar nor oil, to the pollinator, although the plants do have “extrafloral” nectaries – glands not associated with the flower that produce nectar – but that’s another story. So these Oncidium species are known as “deceptive” species. They entice pollinators but don’t reward them for their effort.

By contrast, the orchid Notylia barkeri does produce nectar for its pollinator and therefore is known as a “rewarding” species. The image of N. barkeri is from Infojardin. 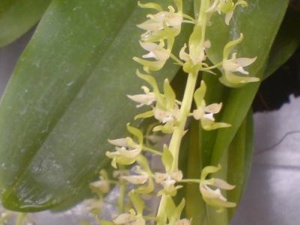 Now it so happens that whether orchids are rewarding or deceptive, pollination rates are low. Yet the orchid family is highly successful, being one of the largest flowering plant families in the world.

Some researchers in Mexico undertook to examine this puzzle by comparing seed production (the result, of course, of pollination) of an Oncidium deceptive orchid, Erycina crista-galli, with a nectar-producing rewarding orchid, Notylia barkeri. They found that although the rewarding orchid did produce more seeds than the deceiving orchid, the actual pollination percentage for both orchids was very low: 1-5%.

Side notes: 1) The article was published online on January 4, 2011, in the Botanical Journal of the Linnean Society. 2) Erycina crista-galli is a miniature orchid that was once called Oncidium crista-galli. I learned this synonym through one of my new favorite tools, The Plant List.

Their conclusion surprised me. As an amateur who knows about, without having read, Darwin’s studies on orchids (The Various Contrivances by which Orchids are Fertilised by Insects), I assumed that the reason the orchid family was so successful was because orchids had been so successful at attracting pollinators. Possibly not, after all. Pérez-Hérnandez and co-workers, suggest that orchids are successful because rather than “…maximizing pollinator attraction, they maximize the seed production resulting from every casual encounter.” Even more startling, the authors suggest that “…orchids have evolved to specialize in chance.”

Update: The Phytophactor mentioned in a comment that Oncidium might look very different under ultraviolet light than it does under visible light. Bees see patterns in ultraviolet that we as humans cannot see. To get a good sense of how drastically different these patterns can be, browse through the fascinating site by photographer Bjørn Rørslett called Flowers in Ultraviolet.

Rørslett used the flowers he had access to and, unfortunately, there’s not an orchid in the bunch. Luckily, a paper published in 1981 called Through the Insect Eye does have some orchid photos, including these of Oncidium.

Here’s an Oncidium under visible light:

and here’s the same flower under ultraviolet:

So now we have another factor to put in the pollinator-attracting mix: 1) the shape of the flower itself, and the possibility of deceiving bees, 2) nectar production to reward the pollinator, and 3) ultraviolet patterns to guide the pollinator to the right spot.

As Sally has pointed out in another comment below, the energy the orchid must expend on any of these “strategies” should be considered.

Yet here we are, at the end of the orchid pollination article, considering the idea that orchids may be relying more on chance than on any of these fancy mechanisms for pollination. It’s a little scary.

I spent a few years at sea, and I never came back from a cruise without having learned something new about the ocean or what lived in it. After retiring to Panama, I began to learn something new about the tropical savanna ecosystem nearly every day I stepped outside. I focused on plants, those marvelous signs of life. Now I'm in my second retirement, living in Sicily. I'm leaving my plant studies online for those who have found them useful.
View all posts by Mary →
This entry was posted in Darwin and tagged Central America, Darwin, Malpighiaceae, Oncidium, Orchid, Pollinator. Bookmark the permalink.

5 Responses to A New Take on Orchid Pollination