Up in the tree, there, a flash of red.

I know it’s not the flowers of this tree. Those red flashes are in a cojoba tree that blooms in May. The flowers don’t look anything like that, at all. Here’s a cojoba flower:

So it must be a vine, some kind of epiphyte, anyway.

But wait, that stem. We’re testing the limits of my point-and-shoot zoom here, but if you look inside the circle, you’ll see where the flowers are attached to the stem. That’s a big, fat, woody stem. That’s no vine!

Keep looking at other parts of this image and you’ll see that both the leaves and the flowers are attached to that stem. That big leaf in the background at center right is not the least like a cojoba leaf. It’s the leaf of this woody, non-vine plant living in the cojoba tree.

That fat stem must be attached to the tree somewhere.

Oh, there. Look at that, almost like a seaweed grasping onto a rock. A holdfast. In case you missed it, here it is circled: 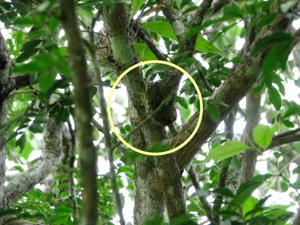 Well, there’s no systematic identification plan for me here. I can’t reach the stem, the leaves, or the flowers for collecting.

I have a vague recollection of seeing a picture of red thingies in a tree-top in Zuchowski’s book, A Guide to Tropical Plants of Costa Rica. So back at the house I start thumbing through it while uploading the images onto my computer.

And there it is: a Psittacanthus species, called parrot-flower in English. Zuchowski says, casually, “These are the showy mistletoes that cling to, and tap into, their hosts.”

So I turn back to the internet. That’s right. Mistletoe. A couple of gorgeous images of this genus from Mexico featured on Botany Photo of the Day, and a pointer to an excellent reference on the species: Mistletoes in North American Conifers. The chapter is on the Psittacanthus that occurs in Mexico. It has an amazingly long life cycle – it doesn’t flower until the fourth year (in Mexico that flowering takes place in November, which is what it’s doing now in Panama) and it doesn’t fruit until the fifth year, also in November.

This is not the mistletoe associated with Christmas decorations in North America, but its way of life is the same. Mistletoes are hemi-parasites. Not quite fully parasitic because they can photosynthesize and produce some food for themselves. But they do draw nutrients and water from their host tree.

Another look at that holdfast, zoomed in a little:

Those things that look like roots climbing up the branch – these may be the “epicortical roots that grow along a host branch surface and at intervals form haustoria,” through which mistletoes draw their water and nutrients from the host [Mathiasen]. Epicortical roots are just one of the four different forms of specialized attachment (singular = haustorium) that mistletoes use, so I don’t know whether my interpretation is correct here.

With a little more searching, I found that most mistletoes are both pollinated and distributed by birds. Psittacanthus is pollinated by hummingbirds, as you might expect from the long, slender, red & yellow flowers.

Many mistletoes produces a berry that has some sticky stuff in it, so when the bird defecates, the seeds stick to the trunk or branch of the tree, the very place where the next generation of mistletoe will begin to grow.

The only picture of a Psittacanthus berry I’ve found is on the second page of the long and fascinating article on mistletoes by Mathiasen et al. cited a moment ago. (The link is to a pdf file of the article, so you can read the whole thing.) In that picture, the berries are bright blue and scrumptious looking. Possibly these berries are eaten by parrots, giving the mistletoe its common name, parrot flower.

I took these pictures a few days ago, and today I went back out to look a little more closely at that holdfast. The flowers were already mostly gone! I’m glad to have seen them because I guess they won’t be back this year. I hope they had time to be pollinated because if they were, then by next November there should be some berries up there in that tree. Something I’d like to see.

I spent a few years at sea, and I never came back from a cruise without having learned something new about the ocean or what lived in it. After retiring to Panama, I began to learn something new about the tropical savanna ecosystem nearly every day I stepped outside. I focused on plants, those marvelous signs of life. Now I'm in my second retirement, living in Sicily. I'm leaving my plant studies online for those who have found them useful.
View all posts by Mary →
This entry was posted in Loranthaceae and tagged Christmas decoration, haustorium, Mexico, Mistletoe, Panama, Tree. Bookmark the permalink.